Yes, Plutarch can be made easier! I promise!
One of my goals with Plutarch is always to make it fun and interesting – and EASIER. It’s one of my favorite subjects in a Charlotte Mason Education. I hope it will become a favorite for you as well. You can do it! 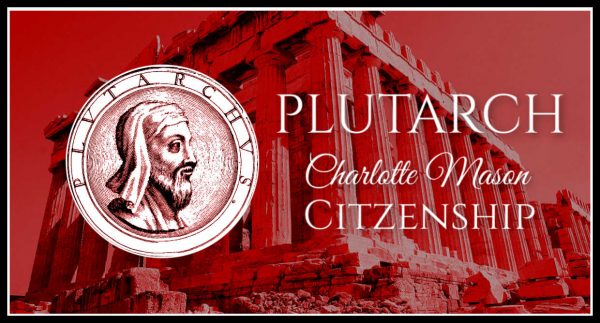 Plutarch, or Plutarchus, was a Greek historian who lived c. 45-120 C.E. He was one of the first “biographers” because he wrote biographies of Greek and Roman men in his book:

Lives of the Noble Greeks and Romans

What did Charlotte Do?

Charlotte started her students in Citizenship Studies in Form 2B, or about 4th grade. The child spent a whole year reading Stories from the History of Rome by Beesly. This prepared the child for Plutarch by providing the context of Roman society.

Then in Form 2A, or 5th grade, the student started reading one of Plutarch’s Lives every term… that’s three lives every year until the student graduated. Most students in Charlotte’s day graduated around 10th grade, so each of her students would study approximately 15 lives by Plutarch.

This is the foundation of her character / citizenship teaching. It is not to be missed.

A Study in Character

Plutarch does not judge for us (although he certainly has his opinions!). He lays the man’s life before us and we are left to judge. It truly is a remarkable way to study character and morality.

Which Translation is best?

Many people in the CM Community will say that the translation that Charlotte used, the one by Thomas North, is the best translation. I disagree.

Plutarch wrote his books in his native language, Greek. The first person to translate the Greek was Jacques Amyot in 1559. He translated Plutarch’s Greek words into French. Then, some 20 years later, Thomas North decided to publish an English version. But he did not translate Plutarch’s writings from the original Greek – he took Amyot’s French translation and transposed it into English. It is a translation of a translation.

The Plenary uses the translation by George Long and Aubrey Stewart for most of our Plutarch Study Guides.

Long was a professor of Greek and Latin at University College in London. He was a major contributor to Smith’s Dictionary of Greek and Roman Antiquities, and also wrote for the companion Biography edition. Stewart was a Fellow at Trinity College in Cambridge, England. Together, they translated Plutarch’s Lives from the ORIGINAL GREEK into several English volumes in the 1800s.

We believe that this translation is not only MORE ACCURATE than North’s, it is also EASIER and more accessible for today’s students. It’s a win-win!

The Annotated Plutarch Series by A Charlotte Mason Plenary

Each book in The Annotated Plutarch Series is intended to really bring the text to life! In each Annotated Life you get:

Just as Charlotte used edited school editions of Plutarch’s Lives, I have edited Plutarch’s original text for length as well as content to remove anything unsuitable for students. You can feel comfortable about handing over The Annotated Plutarch Series to your student for independent use if needed.

Resource Pages for Each Guide

In addition to all of that, as you read through The Annotated Plutarch Series, you will find many wonderful insights within the Plenary Annotations.

Additional information is highlighted on the FREE RESOURCES PAGE for each guide – like this one for Pericles.

Let your student browse these Resource pages and dive deeper into ancient Rome and Greece:

It’s all so fascinating!

In addition to the Resource Pages, you can also order A Plutarch Picture Study for each Annotated Guide.

Throughout the centuries, many famous artists have retold the stories of Plutarch in paint and sculpture. See for yourself how:

The various works of art really bring the stories to life. You and your students can see the stories jump off the page and into these beautiful works of art by some of the world’s most revered artists.

Still need more help with Plutarch? You can outsource it to me!

I teach a Plutarch class via Zoom every semester in The Charlotte Mason Co-op! Yep, your students can take a LIVE Plutarch class with me! Or you can opt for a pre-recorded class and go at your own pace. Join us!

Plutarch's Life of Publicola carries the torch of liberty from ancient Rome to modern day. Find out why Publicola is one of the best lives to begin your study of Plutarch.

Plutarch's Life of Pericles shows us why democracy is such an important idea. Learn how the ancient city of Athens flourished under the leadership of Pericles.

Man of the people or tyrant? You decide. Find out why some people think Julius Caesar is "a man for the ages" and why others find solace in the ides of March.

Man or myth? Go back to the founding of Rome with Plutarch's Life of Romulus.

See the story of the Roman Republic come to life. Scenes of epic battles, treason, honor and duty are told by famous artists in A Plutarch Picture Study: The Life of Publicola.

See ancient Athens in all its splendor. This Picture Study also includes two maps to help your student understand the Peloponnesian War.

Gladiators, Roman Triumphs, and assasinations are all on display in A Plutarch Picture Study: The Life of Julius Caesar.

Myths, legends, and history are all illustrated in A Plutarch Picture Study: The Life of Romulus

Check back often, as I will be adding more links and more resources as new Plutarch Study Guides become available! Yay for Plutarch!